ALONG with bank runs and market crashes, oil shocks have rare power to set monsters loose. Starting with the Arab oil embargo of 1973, people have learnt that sudden surges in the price of oil cause economic havoc. Conversely, when the price slumps because of a glut, as in 1986, it has done the world a power of good. The rule of thumb is that a 10% fall in oil prices boosts growth by 0.1-0.5 percentage points.

In the past 18 months the price has fallen by 75%, from $110 a barrel to below $27. Yet this time the benefits are less certain. Although consumers have gained, producers are suffering grievously. The effects are spilling into financial markets, and could yet depress consumer confidence. Perhaps the benefits of such ultra-cheap oil still outweigh the costs, but markets have fallen so far so fast that even this is no longer clear.

The new economics of oil

The world is drowning in oil. Saudi Arabia is pumping at almost full tilt. It is widely thought that the Saudis want to drive out higher-cost producers from the industry, including some of the fracking firms that have boosted oil output in the United States from 5m barrels a day (b/d) in 2008 to over 9m b/d now. Saudi Arabia will also be prepared to suffer a lot of pain to thwart Iran, its bitter rival, which this week was poised to rejoin oil markets as nuclear sanctions were lifted, with potential output of 3m-4m b/d.

Despite the Saudis’ efforts, however, producers have proved resilient. Many frackers have eked out efficiencies. They hate the idea of plugging their wells only for the wildcatter on the next block to reap the reward when prices rebound. They will not pack up so long as prices cover day-to-day costs, in some cases as low as $15 a barrel (see article). Meanwhile oil stocks in the mostly rich-country OECD in October stood at 267 days’ net imports, almost 50% higher than five years earlier. They will continue to grow, especially if demand slows by more than expected in China and the rest of Asia. Forecasting the oil price is a mug’s game (as the newspaper that once speculated about $5 oil, we speak from experience), but few expect it to start rising before 2017. Today’s price could mark the bottom of the barrel. Some are predicting a trough of as low as $10.

The lower the better, you might say. Look at how cheap oil has boosted importers, from Europe to South Asia. The euro area’s oil-import bill has fallen by 2% of GDP since mid-2014. India has become the world’s fastest-growing large economy.

Yet the latest lurch down is also a source of anxiety. Collapsing revenues could bring political instability to fragile parts of the world, such as Venezuela and the Gulf, and fuel rivalries in the Middle East. Cheap oil has a green lining, as it drags down the global price of natural gas, which crowds out coal, a dirtier fuel. But in the long run, cheap fossil fuels reduce the incentive to act on climate change. Most worrying of all is the corrosive new economics of oil.

In the past cheap oil has buoyed the world economy because consumers spend much more out of one extra dollar in their pocket than producers do. Today that reckoning is less straightforward than it was. American consumers may have been saving more than was expected. Oil producers are tightening their belts, having spent extravagantly when prices were high. After the latest drop in crude prices, Russia announced a 10% cut in public spending (see article). Even Saudi Arabia is slashing its budget to deal with its deficit of 15% of GDP.

Cheap oil also hurts demand in more important ways. When crude was over $100 a barrel it made sense to spend on exploration in out-of-the-way provinces, such as the Arctic, west Africa and deep below the saline rock off the coast of Brazil. As prices have tumbled, so has investment. Projects worth $380 billion have been put on hold. In America spending on fixed assets in the oil industry has fallen by half from its peak. The poison has spread: the purchasing managers’ index for December, of 48.2, registered an accelerating contraction across the whole of American manufacturing. In Brazil the harm to Petrobras, the national oil company, from the oil price has been exacerbated by a corruption scandal that has paralysed the highest echelons of government.

The fall in investment and asset prices is all the more harmful because it is so rapid. As oil collapses against the backdrop of a fragile world economy, it could trigger defaults.

The possible financial spillovers are hard to assess. Much of the $650 billion rise in emerging-market corporate debt since 2007 has been in oil and commodity industries. Oil plays a central role in a clutch of emerging markets prone to trouble. With GDP in Russia falling, the government could well face a budgetary crisis within months. Venezuela, where inflation is above 140%, has declared an economic state of emergency.

Other oil producers are prone to a similar, if milder, cycle of weaker growth, a falling currency, imported inflation and tighter monetary policy. Central banks in Colombia and Mexico raised interest rates in December. Nigeria is rationing dollars in a desperate (probably doomed) effort to boost its currency.

There are strains in rich countries, too. Yields on corporate high-yield bonds have jumped from about 6.5% in mid-2015 to 9.7% today. Investors’ aversion spread quickly from energy firms to all borrowers. With bears stalking equity markets, global indices are plumbing 30-month lows (see article). Central bankers in rich countries worry that persistent low inflation will feed expectations of static or falling prices—in effect, raising real interest rates. Policymakers’ ability to respond is constrained because rates, close to zero, cannot be cut much more.

Make the best of it
The oil-price drop creates vast numbers of winners in India and China. It gives oil-dependent economies like Saudi Arabia and Venezuela an urgent reason to embrace reform. It offers oil importers, like South Korea, a chance to tear up wasteful energy subsidies—or boost inflation and curb deficits by raising taxes. But this oil shock comes as the world economy is still coping with the aftermath of the financial crash. You might think that there could be no better time for a boost. In fact, the world could yet be laid low by an oil monster on the prowl. 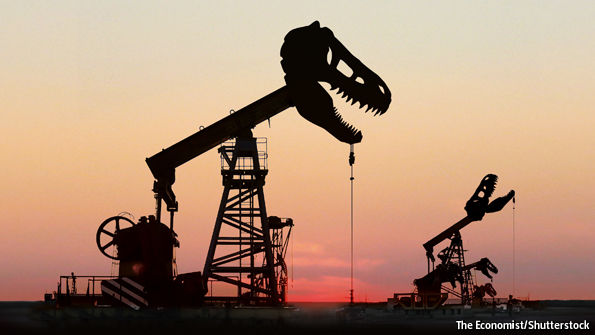 ALONG with bank runs and market crashes, oil shocks have rare power to set monsters loose. Starting with the Arab oil embargo of 1973, people have […]
Do you like it?0
Read more