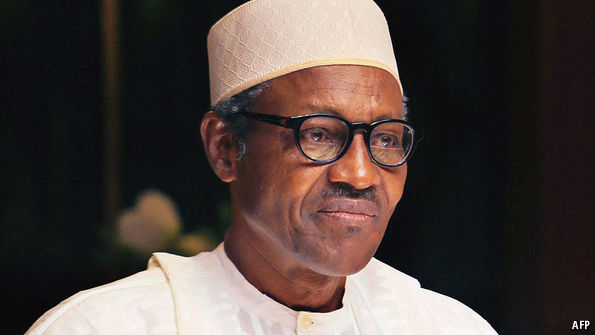 “GIVE me lucky generals,” Napoleon is supposed to have said, preferring them to talented ones. Muhammadu Buhari, a former general, has not had much luck when it comes to the oil price. Between 1983 and 1985 he was Nigeria’s military ruler. Just before he took over, oil prices began a lengthy collapse; the country’s export earnings fell by more than half. The economy went into a deep recession and Mr Buhari, unable to cope, was overthrown in a coup.

Now he is president again. (He won a fair election last year against a woeful opponent; The Economist endorsed him.) And once again, oil prices have slumped, from $64 a barrel on the day he was sworn in to $32 eight months later. Growth probably fell by half in 2015, from 6.3% to little more than 3% (see article). Oil accounts for 70% of the government’s revenues and 95% of export earnings. The government deficit will widen this year to about 3.5% of GDP. The currency, the naira, is under pressure. The central bank insists on an exchange rate of 197-199 naira to the dollar. On the black market, dollars sell for 300 naira or more.